Why so distracted? Well, there’s been a little bit of knitting – I made some headway with the lacy knitting pattern, and there’s the beginnings of another balaclava in the works.

And with a little warm weather upon us, I’ve been gardening – today saw my first earlies, 3 rows of Arran Pilot, go in, and the planting out of a measly eight pea plants that were started off at home (we did sow more than 8, but the seed is obviously getting on a bit as less than half of them came to anything). The maincrop potatoes are still sitting’n’chitting on the windowsill, but hopefully they won’t be by the end of this week.

Along with the peas (that were sowed a week or two ago), there’s chard (Lucullus), loose-leaf lettuce (Red Salad Bowl), parsley and Little gem lettuces – all but the latter have come up, so that’s two more packets of seed I need to order, along with parsnip, Hamburg parsley, and swede. They’re all still at home at the moment, as they’re still quite small, and while we’ve had some warm days the last couple of weeks the nights have been cold.

In amongst all that, there was a trip to see the folks down south.

Most of this, however, didn’t take up the whole month. A fair bit of my energies recently have been spent ruminating, planning, organising and imagining… because at the start of last month we decided to finally set a date for our wedding, having been engaged for the last three and a half years. There’s plenty of time yet, as we’re going for June 2011, but I’m going to savour every moment spent drifting through wedding blogs, and etsy, and recipe sites, and all the rest of it, right up till what I hope will turn out to be the best party of our lives.

I forgot to take a picture of the gardening I did today, and I don’t have any knitting pictures either, so here’s a rainy picture from last month of the church we’re hoping to marry in – 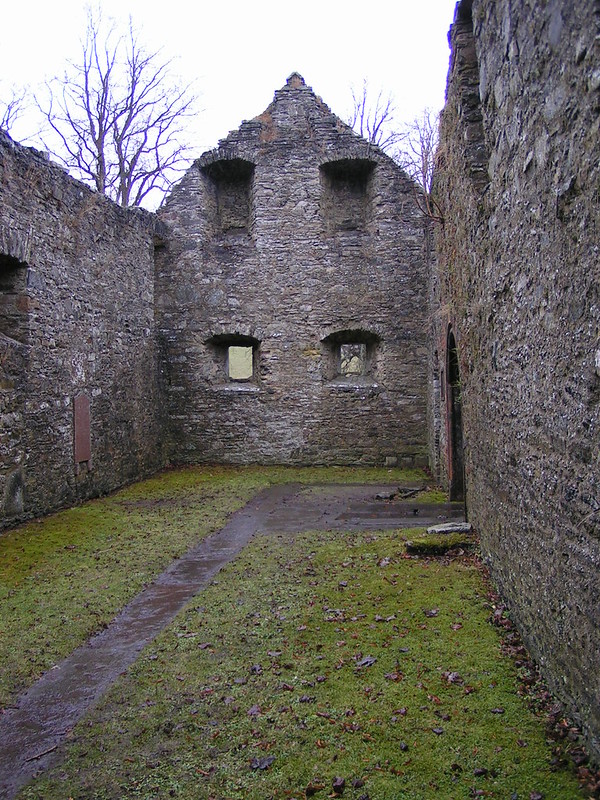 I think roofs are overrated.

Just what January calls for, if you ask me.

Here’s the story so far with the Shetland lace spinning –

(and the supermacro shot)

I had a guesstimate while winding the first single off the bobbin, and think it comes out somewhere around the 750yd mark. (Cue muttering.) The first person to complete the 800yd challenge did so today, with a very healthy 870 yds of laceweight, so congratulations to apricotqueen – I’ll be very pleased if I get anything like that amount of yarn. I’d like to think I can get this finished, and plied, and knit into something lovely for the end of next month, when we go away for my partner’s sister’s wedding. We’ll see.

I probably would’ve had the singles finished now had I not left my wheel (and the other half, who had to stay behind for work) at home while myself and the girls went visiting.

I took a 3lb haggis from our local butcher down the road, and we celebrated Burns night in style –

Haggis, neeps, tatties (and carrots for the one who *gasp* doesn’t really like neeps). I ate so much, I could hardly finish my pint. And I had a bash at making cranachan –

but didn’t quite make it all the way to the bottom of the glass. It was delicious, but I was utterly stuffed. I kind of used this recipe.

I also delivered the socks for my brother-in-law, who seems well pleased with them – they’re a bit larger than his feet, apparently, but having size 14s I expect that’s quite a novelty. I did tell him that if he gave them a slightly hot handwash they should be more snug, but he said he was happy with them that way – I think they’ve become his cosy slipper socks for round the house.

I also got a hat knit up while I was there – one of these, though it did require a few extra inches than the pattern states in order to cover my brother’s ears.

On the needles right now is the beginnings of an improvised top-down pullover for the littlest member of the house, and if there’s enough of the Lewis’ clearance cashcotton left over when it’s done, her big sister might get one too. (There’s almost 2000yds of the stuff, so it’s likely she will.) It’s my first attempt at top-down, in the round, sweater knitting – my previous ones have always been knit flat – so this promises to be interesting.

(Lacey thing has been relegated to the back of the queue – I’m not happy with how certain parts of it look, but I’m not in the right frame of mind for the recharting I need to do to get the modifications I think it needs worked out.)

We managed Hallowe’en after all. Costumes were found – this photo is pre-guising, so you can’t see the bag full of sweeties they ended up with –

and apples were bobbed –

And after the flower fairy and the witch were tucked up safely in bed, myself and the other half settled down with whisky and The Ghoul – the 70s Cushing one, not the Karloff one from the 30s – and had ourselves a startling evening’s entertainment. We missed the opportunity to recreate the first night I watched this film, when it appeared on the BBC as part of a double bill with Night of the Demon… ah well.

Bonfire Night came and went, we had a few fireworks but I was too busy running about in the dark, slipping over on wet leaves, trying to wrestle back control of the torch from a two year old and being part of a firework-lighting tag-team to take any photos.

Yesterday we were up the garden, during a brief respite from the bucketloads of rain we’ve had up here in the last couple of weeks.

I’ve managed to get another couple of spits dug below where the potatoes came out, there’s only about 18″ left to dig at the bottom of this bed now (it’s under the rubber mat – that’s what I use to keep myself a bit of workable, dryish ground to dig in this horribly soggy weather).

The view from the other end –

That’s the garlic and japanese overwintering onions. The garlic is bigger than the onions, which just seems wrong, but heyho.

The other side of the path. The brassicas are still displaying a dramatic lean caused by the overhanging trees that are now GONE! Well, mostly.

The patch of bare soil in the foreground (in front of the puny leeks) is going to be one of two or three small tattie patches next year (I’m going to plant them either end of this bed, I think.) It needs a good weeding and a load of muck before that happens though.

See that Tuscan Kale at the left there, the strappy dark green leaved thing? The one that looks very healthy? I snapped the top of it off whilst trying to pick a leaf from it yesterday. God knows how, the stem was really thick. There was swearing.

The parnsips, few though they are, will have had their first frosting now – I think it might be time to sample one or two of them soon.

A close up of the other end –

The red kale’s looking a bit leggy, I think.

There’s only three of these, but I’m very pleased with them, and now I hopefully won’t have the trauma of turning up and finding they’ve had their growing tips eaten to pieces by hungry pigeons.

They’ll be a welcome crop in early spring – I’ve nothing much of anything else happening that’ll be around then. I’m planning on some early sowings of salads, lambs lettuce and the like, possibly some oriental greens, but need to get a cloche sorted for that, really. Or a tunnel – I have the plastic already, just need to decide on where to site it and get hold of some drainage pipes and scaffold poles (apparently). The shed would be a good candidate for conversion, but that’s a major operation, and I expect it would mean losing the stove’n’chimney set up that’s in there, that I’d hoped to one day get going.

It’s about that time of year again – plans need to be made, seeds need to be reconciled. It’ll be time to chit the potatoes before I know what’s hit me.

I’ve got some knitting on the go at the mo, some more weirdo stuff to wear on your head should be appearing shortly, and I do have a lace thing bubbling away nicely, though that’s still some way off being a finished object. Watch this space.