Once again I’m just back home after visiting down south to see family where, at the weekend, I handed over the little pink baby shrug (and had a cuddle with my grand-niece). My sister had bought a pretty little dress from a shop close to where she lives, and they made a nice little set – 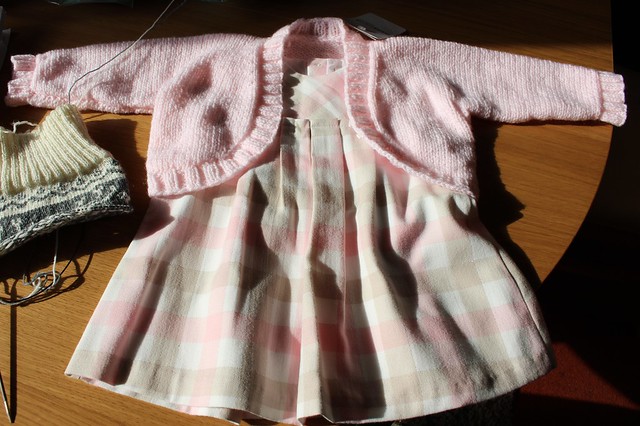 She’d also bought a little pale grey dress, flecked with bits of red, for a long-time friend’s new baby granddaughter (who I knitted a little Yoked Baby Sweater for, back in August – a pattern that’s really easy, but also really cute). After our friend saw the photo I’d taken, she asked if I’d be able to knit one in red to go with the little grey dress. She’s always been one of those neighbours that’s like family, so I told her I was more than happy to (and honestly, it’s a fast and satisfying little knit, nice easy telly knitting), and thought I’d try and find some yarn for it while I was there.

The LYS in my home town is called Dragonflies, and just so happens to be owned and run by an old school friend who – until this weekend, at least – I haven’t seen since we were at college (I’ve popped in before but managed to miss her, as her mum also works in the shop). She sells lots of crafty bits and bobs besides yarn, does clothing alterations and custom dressmaking, including wedding outfits – in fact, when I walked through the door she was sat working on a wedding dress. I wasn’t entirely surprised to discover she’d opened the shop, I’ll be honest. As a teenager, she was the only person I knew that owned a proper dressmaker’s mannequin – in fact, she’s still the only person that I know that owns one! It was lovely to see her and have a quick chat, and I’m going to make an effort to get along to one of the Knit and Natter sessions they have each week for a bit more chat (I was worried about holding up other customers that’d come in!).

I did come back with a nice christmassy red (in Stylecraft Special DK, which will give me a taste of how it handles before I tackle the S18 scarf) – 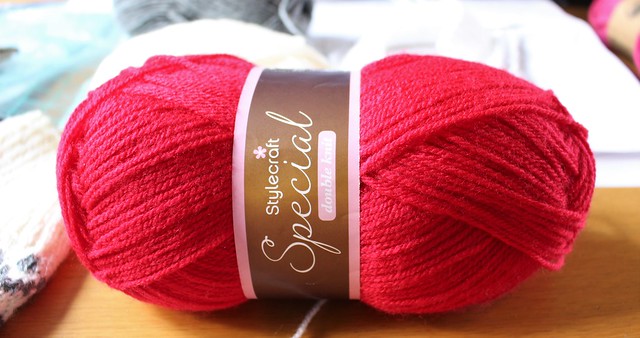 And my younger daughter Heidi bought herself a ball of their Cabaret yarn, in her favourite colours, though she’s yet to work out what she’s going to knit with it – like mother, like daughter, it seems. 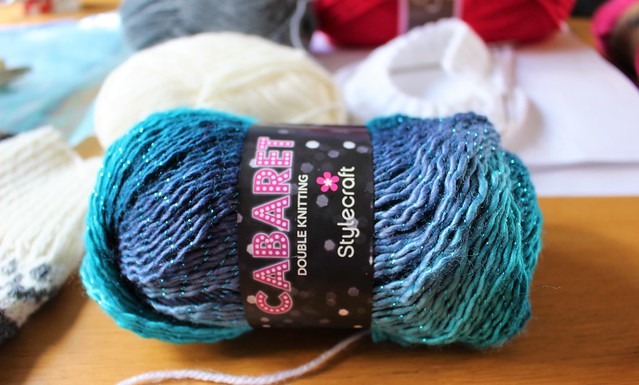 I haven’t cast on the red shrug as yet, though, because before that I’d also promised a baby knit for another grandchild of the same friend – this one isn’t due to arrive until mid-December, but with all these projects on the go, I thought I’d best crack on. Unlike with the previous knits, this time I don’t know if I’m knitting for a girl or a boy, so I’ve gone for the classic option and decided to make a little white cardi.

While I do like the Yoked Sweater, I fancied having a bit of a change – in fact, I fancied having a bit of a play. After a bit of a browse on ravelry and the Drops site for inspiration, I’ve cast on a suitable amount of stitches in some white DK acrylic from my stash, using 3mm needles to make a cosy fabric. There’s a little bit of 2×2 rib, and it’s mostly stocking stitch. I’ve added a row of cabling either side of the front edges, and I’m just starting the first sleeve, which will also have a central cable section. I did consider adding little pockets but I’m having second thoughts, because baby pockets aren’t the most necessary of things! 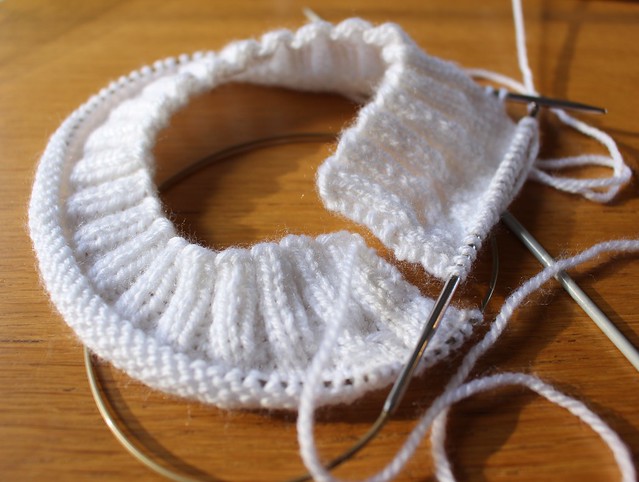 My sister’s sock hasn’t been totally forgotten in all this. I’ve been working my way down it steadily, but it’s a complicated fiddly thing (there’s none of the easily memorised stitch repetition of most motifs going on at the moment), and so it’s something I pick up and have a storm through in between doing the easy stuff. I’m one of those knitters that gets easily bored, I think, and having three or four projects to hand keeps me knitting. Still, I’m almost finished with the first sock’s deer panel (I went with the deer pattern in the end, yes). They’re just needing some legs – 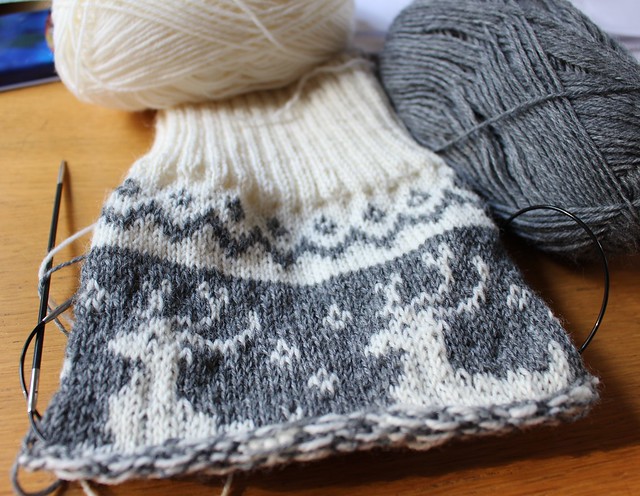 The new projects have just set me off though, because somehow I’ve ended up casting on a pair of mittens with some of the Lima I had in my stash. Next up will be the christmas knits I’m planning for my grand-niece, so I need to order some cotton yarn, and I’ve a pile of stashed Karisma that I think will possibly turn into a jumper and hat for baby R, though I need to work out the most christmassy colours – I’ve got off-white, red, green and blue (they’re colours I bought with christmas stockings in mind last year). Mum fancies a red sweater, so I might just go with white – and possibly a Santa hat to go with it!

Once I get those underway, I want to knit up some other gifts for family. I did knock out a very quick chunky red hat for my youngest last week – it only took a day, I think, but isn’t quite finished because it definitely needs a pompom (I’m not taking a photo until I’ve done that). It’s not a christmas gift, just something practical to keep his little bonce warm now the weather’s cooled off – once this little list of baby knits are finished I’m going to concentrate on making something for my more immediate family, in between making some knits to list in my etsy shop. I’d like to get back into designing, too, but I think that might have to wait until after Christmas.

This site uses Akismet to reduce spam. Learn how your comment data is processed.