Well, a six month gap between posts is, I suppose, some kind of improvement in my current posting habits – I do have much easier access to a ‘proper’ computer now, which obviously helps. And I have an FO, and a couple of new WIPs, also helpful if I don’t want to just waffle on about nothing in particular.

The FO in question is the Drops Wonder Wave cardi, which turned out rather well, eventually – 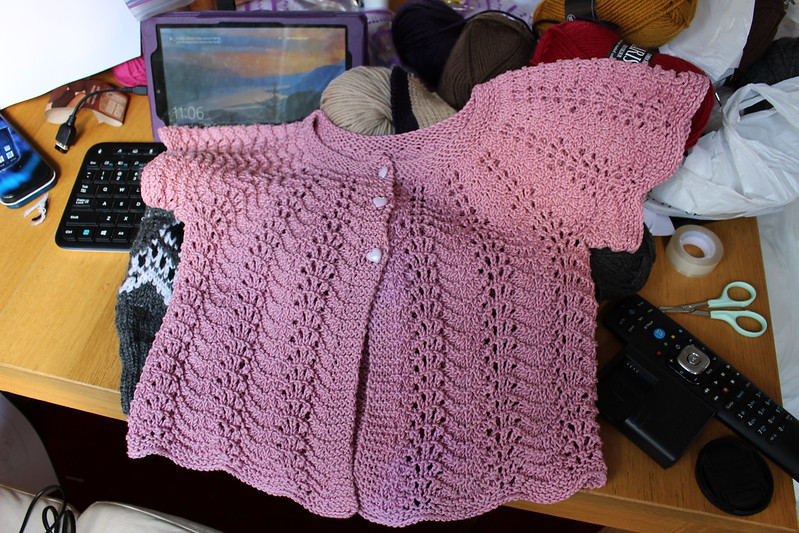 It was a relaxing, enjoyable and easy knit for the most part, aside from a few mistakes caused by not paying attention (I was lulled into a false sense of security by feather and fan). There was a mishap on its second wash with some superconcentrated laundry gel, leaving it with a small patch at the front which, in certain lights, I can tell has changed shade very slightly from the rest of the fabric (the lighting in this photo makes it look like the whole garment is two tone – it’s just the effect of sunlight, it’s not actually that/those colours). Everyone else says it’s fine/not even noticeable, but I’m still annoyed – particularly as I’d made sure the stuff had gone in the washer drawer, as the gel bottle instructed, rather than sticking it into one of those washballs as usual and putting it in the drum. Anyway, no use worrying about it now  (and it might not actually be so much of an issue from now on, as we’re now the proud owners of a brand new and shiny machine which should in theory be much, much better than the old one, and which apparently premixes the detergent).

Wavy cardi out of the way, I’ve started work on my mysterious Who jumper, hence the peculiar blog post title – it’s my attempt at recreating the jumper Sarah Jane Smith wears for much of Genesis of the Daleks (and the previous serial, The Sontaran Experiment, which I suppose might also lend itself well as a title, but GotD won because it has daleks, and Davros, but more to the point, it has Nyder). The geometric design on it is, I think, really lovely. It even reminds me slightly of a cover illustration for The Hobbit that I remember from years ago, as a bonus. Transcribing the motif itself proved not too tricky, though I have found that as I decided to knit in the round, the fact that the design only appears at the front of the jumper has meant lots and lots of ends at either side of it. I was finding it hard to tell how well I’d tensioned my stranding, so after finishing the bottom motif, I sat and did a bit of weaving in. (I knitted in the tail ends of them, so it only meant one side of it to weave in, but it still took a while. I’m kind of glad I didn’t leave it until I’d finished, and intend to do the same after the top motif, so that when I reach the neckline, job done.) 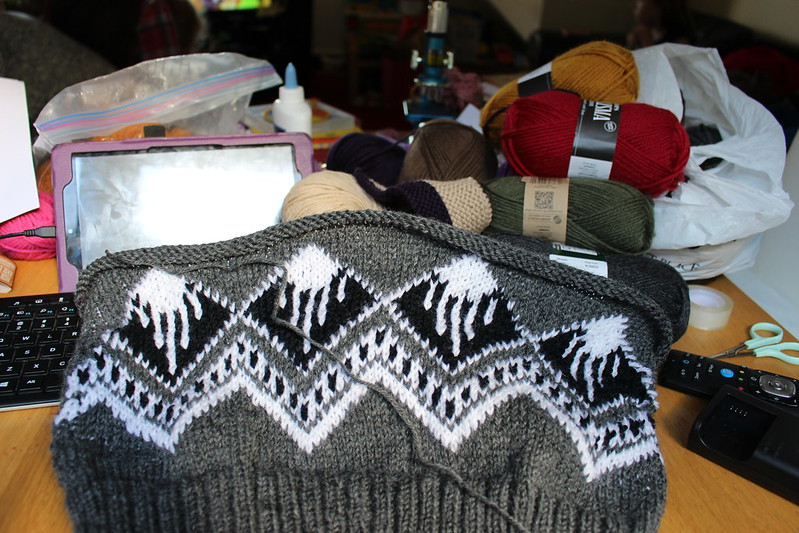 This photo was taken just before I did all the weaving – I’ve since knit a few more inches of the plain stockinette, and think I’ve probably got enough length in it now to begin the top motif, which I think should probably start an inch or two below the underarm. I haven’t started the second bout of stranding yet, but I’ve made a start on the first sleeve in the meantime, at least until I feel like something a bit less stockinettey.

This, I think, is where it’ll get properly tricky. I’ve only ever knit one contiguous sleeve jumper, and that was top down (and in aran yarn rather than DK), so that could prove ‘interesting’.

In the background, you can see most of the colourway of my other current Who knit, another nice knit-knit-knit piece in the form of a long, long overdue long, long scarf, because I decided it really was about time I made a Fourth Doctor scarf. It’s season 13 (because that season is husband’s favourite, and y’know, the one with Seeds of Doom in it), and while on that photo I’ve knit about twenty rows, thanks to being fairly poorly recently and not being up to much other than sitting about I’m currently about two hundred rows in. Now, my childhood favourite (in that it contains most of the episodes I remembered, and all of my favourite companions – yes, including Adric) is season 18, and so personally, I’d love a season 18 scarf. It also happens to be a beautiful colour, and chenille, however… according to the doctorwhoscarf.com site, appropriate yarn is notoriously difficult to source. Now, I won’t say that I’m 100% happy with the colours I managed to get for the s13 I’m knitting, but they’re pretty good – however, getting to that point did take some time, and I battled constantly with going batty over it for most if not all of that time. So that news is less than ideal, shall we say?

Whilst perusing the s18 page I also discovered a facebook group that is, I think, likely to become yet another place for me to spend an hour or two when I should probably be doing something less frivolous. Hopefully I’ll be updating here soon with a much longer scarf picture – I’ve realised that if I take photos while I’m knitting I’m more inclined to finish my blog posts before they become hopelessly out of date. I’ve got Big Plans for Christmas Knitting in my head too (well, maybe medium sized plans, but still), we’ll see how that goes. I’m hoping that writing it out loud, as it were, might give me more of an incentive to actually produce something, though I’m probably not going to be too specific, as aside from the stockings I mentioned in my last post, some of the may end up as gifts – this might work against the bucking-up-your-ideas plan, mind you…

2 thoughts on “genesis of the jumpers…”

This site uses Akismet to reduce spam. Learn how your comment data is processed.